I used to be on the pill. Having been single for many years, I really didn’t have a need for it so when the prescription ran out a few years ago, I never bothered refilling it. In 2014, I began experience anxiety, that among other things, manifested itself in missing periods for months at a time. Since I wasn’t sexually active this was fine.

Then I started dating again and after my time with Ryan, I decided I needed to get back on some sort of birth control. A friend recently had gotten Mirena, an IUD and she seemed to be loving it so I reached out to her for more info. After speaking to her, I went to the gyno and set an appointment for insertion of the IUD on 12/7. One of the things that is stressed prior to its placement is that you cannot have sex for two weeks before in the event that you become pregnant.

Since Ryan had been MIA, this wasn’t likely to be a problem. Then I met Finn. However, he had mentioned wanted to take things slowly so I was good to adhere to doctor’s orders. I had mentioned to Finn that I had a doctors appointment that day, but didn’t mention specifics.

I left work early to have the procedure done. The doctor had given me two Cytotec pills to take in advance of the procedure, one the night before and one the morning of. She had stressed again the importance of not having sex those two weeks because the Cytotec would abort any pregnancy. I was prepared for some serious cramping and bleeding after taking them based on what she had said and what I’d read online. The one I took the night before upset my stomach a bit, but not so much that I couldn’t sleep. The one the next did nothing as far as me feeling any physical effects.

I went to my appointment and was in and out in 20 minutes with some minor bleeding and even more minor cramping. The doc and the ultrasonographer both told me I had a beautiful uterus. This was too funny not to share with Finn so I texted that to him upon leaving the appointment.

His response was as I had hoped, kind and open. Like I said some guys are just pansies about the female reproductive system.

This was after our night where he said he wanted to wait to have sex, hence my coy comment back.

He asked me how I was feeling and I told him it wasn’t nearly as bad as I expected. My friend had told me her experience resulted in feverish sweats the whole evening afterward so I was a little nervous about what my reaction would be. I’m fortunate as far as my beautiful uterus goes. I’ve never been known to experience cramps or the like. I have other abdominal issues so I guess that someone was considering that when making me. “Let’s not kill this girl with discomfort all the damn time and then compound it for one week a month too.”

I took the day after my insertion off just in case it had been bad so I didn’t do much but relax that day. We texted throughout the day 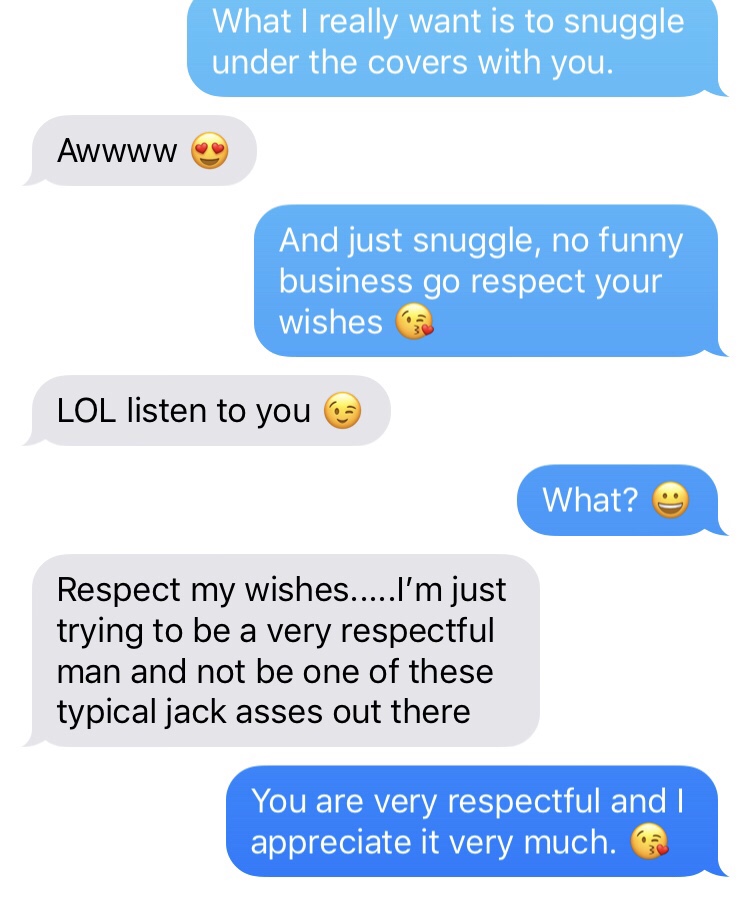 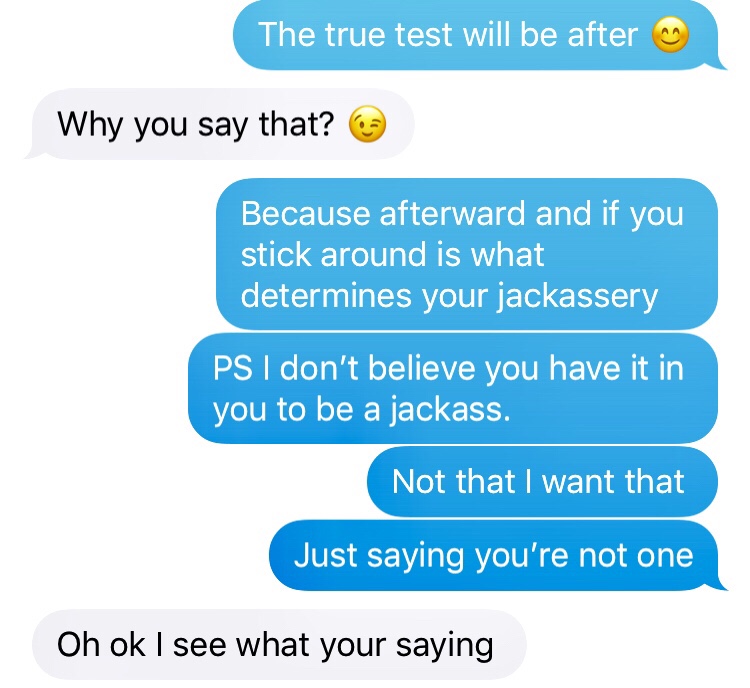 That evening, Finn had had plans to go out of town and he texted me around 8 to see what I was up to. He had been stood up by his friends so he was in his hotel room all alone. I asked him how crazy would it be if I came to visit him. He tried to talk me out of it as they were calling for snow overnight but I figured I’d get there around 10, do whatever and then leave around 2.

Yeah, that didn’t happen. I got there at 10 alright, but we went to a bar and got a little drunk. We came back to his room and that whole waiting thing went out the window.

Unfortunately, the alcohol had not only lowered his inhibitions, but also his ability to perform fully. Regardless, he took care of me in multiple ways, multiple times. He told me he was a “pleaser” and that getting me off was almost as good as getting him off so he was happy with how the night had unfolded.

The biggest problem was that goddamn Ryan. He had a fantastic dick that worked well under extreme alcoholic conditions. Finn’s had proven otherwise.

I will say this, the sex was not as good as that first kiss, but I still enjoyed myself. I just had to keep that in mind because I could be known to dwell on negative things when there are SO many positives to Finn. Not to mention, the first time can be a struggle and things get better with time, patience, and understanding what each other likes. That’s what I’m focusing on at the moment and hoping for improvement.